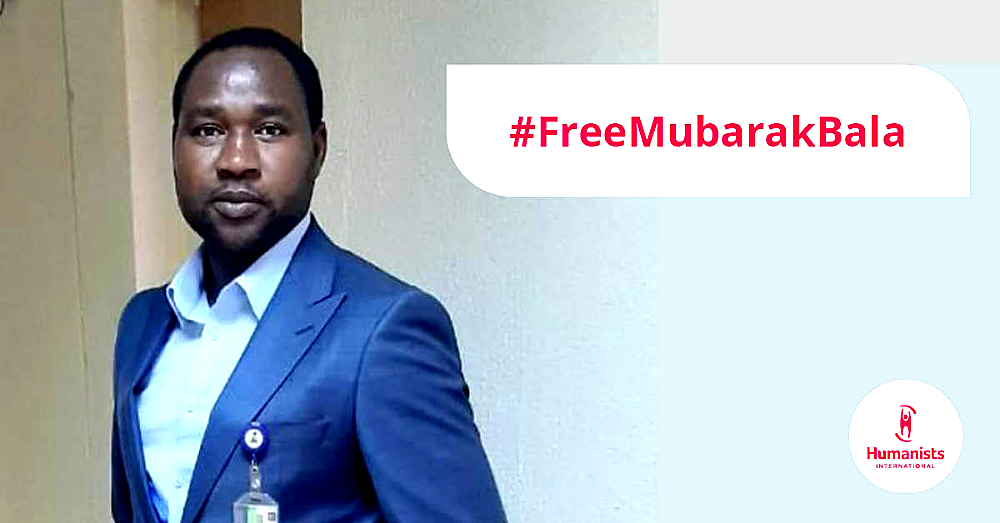 THIS week Humanists International reported that the scheduled hearing of Bala’s Fundamental Rights petition before the Abuja High Court had to be postponed after the judge assigned was taken ill. The petition will now be heard on Monday 19 October.

Leader of the humanist movement in Nigeria and human rights advocate, Bala, above, has been detained without charge in Kano state for 170 days in connection with a Facebook post.

On 8 May, Bala’s legal team set about filing a petition with the Abuja High Court seeking to secure his release on the basis that his detention violates his rights to liberty, fair trial, freedom of thought and expression, and freedom of movement as enshrined in the Nigerian Constitution and international human rights law.

While the petition should have been heard within seven days, the case has faced multiple adjournments.

Humanists International believes that Bala is being targeted for the peaceful exercise of his rights to freedom of expression and religion or belief. It calls for the case against him to be dropped, that he be granted unimpeded access to his legal advisors and charged with a crime or be released. If charged, he should be transferred to a neutral territory in order to ensure his right to a fair trial.

Humanists International is organising this fundraiser for humanists at risk. It has so far raised more than £19,000 of a £25,000 goal. If you would like to make a donation, click on this link.

Providing an in-depth background to Bala’s arrest and detention without trial, Nigerian humanist and human rights advocate Leo Igwe, above –a patron of the Oink Triangle Trust – this week wrote:

The arrest of Mubarak Bala has foregrounded the dangerous situation of humanists and the vicious threat of Islamic extremism in Nigeria. Nigeria is a very religious society. Religious belief permeates all aspects of life, thought, and culture.

In 2004, Nigeria was polled as the most religious nation in the world. People mainly profess Christianity, Islam, and a mix of traditional and Christian or Islamic faith. Both Christianity and Islam are foreign religions. Western missionaries introduced the Christian faith, while Muslim scholars and jihadists from the Middle East brought Islam.

The place of sharia in post-colonial Nigeria has been a source of controversy, tension, and conflict. Sharia applied to personal and family issues until 1999 when Muslim majority states in Northern Nigeria started implementing the full sharia law that included punishments such as amputation for theft and the death penalty for blasphemy.

Some of the Muslim majority states include Kano, where Mubarak Bala was born, and Kaduna, where he was living until his arrest. In Muslim majority and sharia implementing states, Islamic privilege holds sway. Non-Muslims are treated as second class citizens. Non-Muslims, who are accused of blasphemy or desecrating the Quran, are attacked and killed with impunity.

In Muslim dominated northern Nigeria, humanity or dignity is predicated on the profession of Islam. Non-Muslims who convert Islam are celebrated and honored and sometimes given financial rewards. Those who renounce Islam or espouse dissenting views, as in the case of Mubarak are disowned, persecuted, or killed.

Bala came out as an ex-Muslim in 2014, and his family did not take it kindly. Bala’s father is a foremost Islamic scholar and one of those behind the implementation of sharia in Kano. In response to his renunciation of Islam, Bala’s family consigned him to a mental hospital in Kano where he was treated as a psychiatric patient.

Information about Bala’s maltreatment and persecution reached humanists and atheists who campaigned and rallied support. Humanists pressured the Nigerian authorities until Mubarak Bala was eventually released from the hospital.

Since Bala left the mental hospital in 2014, he has been the face of humanism, skepticism, and freethought in Northern Nigeria. Bala has been vocal in his criticism of Islam especially the violent campaign of jihadist groups such as Boko Haram.

Bala has been critical of Islamic indoctrination and the practice of Almajiri. Almajiri refers to the practice of street begging by children who are learning the Quran in northern Nigeria. Children who are learning Quran roam the streets and beg for alms. The proceeds are sent to their Muslim teachers. Some of the children come from neighboring countries including Niger, Mali, Burkina Faso, and Cameroun.

It has been noted that some of the children get radicalized and have been recruited to join jihadist groups. In his posts comments and articles, Mr. Bala continued to draw attention to the link between Islam as practiced in Nigeria and terrorism, poverty, and underdevelopment in Northern Nigeria.

Islamic authorities found Bala’s writings annoying and irritating. Bala was becoming a rallying point for many young critics and dissidents in the region. He was identified as the arrowhead of the emerging atheist, skeptical movement in the area. Until the emergence of Mubarak Bala, ex-Muslims have been in the closet and seldom go open and public with their views.

Those who renounce Islam do not openly declare their apostasy. Muslim apostates are not a visible and distinct identity or social group in Northern Nigeria. But with Mubarak Bala, the landscape of apostasy has been changing. Bala has been open about his rejection of Islam and has continued to openly and publicly criticize Islam, including the prophet of Islam.

Mubarak Bala has campaigned to change this culture of silence of Muslim apostates, dissidents, and critics. Bala has used his posts on Facebook to underscore the rights to freedom of religion and freedom from religion. Bala is of the view that if Islam based abuses must be rooted out, then the faith, teachings, and prophet must be criticized.

Insulting the prophet of Islam

In April, some Muslim lawyers petitioned the police in Kano state. They complained about some posts, which Mr. Bala made on his Facebook page. They said that Bala had called the prophet of Islam a pedophile and a terrorist.

These Muslim petitioners said that these posts insulted the prophet of Islam and contravened sections of the Nigerian law that prohibited contempt on religion. To avoid a break down of law and order by Muslims, the petitioners argued, the police and the Kano state government should arrest and prosecute Mubarak Bala.

It must be noted that the Islamic religion is foreign to Nigeria. Muslim scholars and jihadists who introduced the Islamic faith criticized African traditional religion and other faiths. The Islamic declaration of faith is critical of other gods, prophets, and religions. It states that there is no other god but the Islamic god and Muhammad as the messenger.

The Islamic religion is founded on the denunciation of other religious gods and prophets. Muslims dismiss other gods except for their god, Allah, and other prophets and messengers except for their prophet, Muhammad.

Meanwhile, they do not tolerate criticisms of their god, Allah, and their prophet, Muhammad. Muslims regard the criticism of other gods but Allah and other prophets but Muhammad as an affirmation of faith. They designate the criticism of their religion and prophet as blasphemy and an offense punishable by death under sharia. But the case of Bala presents a challenge.

On April 28, police detectives from the Kano state police command arrested Mubarak Bala in Kaduna. The following day they whisked him away to Kano where the police held him incommunicado. The police disappeared Bala and for months.

They refused to disclose where and how he was detained. The police could not confirm if Mubarak Bala was alive or dead. Many Muslims posted on social media welcoming the arrest of Mr. Bala and threatening to kill him if the police did not severely punish him. Some Muslim fanatics threatened to arrest and prosecute other atheists who criticize Islam or post blasphemous comments on social media.

The police and the Kano state government have been in a dilemma over the case of Mubarak. Bala is not a Muslim, so they cannot charge or prosecute him in a sharia court as many Muslims in the region would have wanted. The prosecution in a state court where the punishment for blasphemy is a maximum of two-year imprisonment would not appease the Islamic base in Kano and beyond.

The police decided to hold him incommunicado in a police cell and later, in a prison. Following months of international pressure on the Nigerian authorities, Mubarak Bala has been allowed to call from a prison where he is being held. No real progress has been made in his case in Kano and Abuja.

In Kano, the police have approached a magistrate court. But the court has not formally charged Mr. Bala. For months, the police have refused to obey a court order granting Mubarak access to a lawyer. In Abuja, the process to enforce Bala’s fundamental rights has been stalled.

The process has suffered delays and adjournments.  These delays are deliberate. The courts do not want to make any ruling that would embarrass the sharia government in Kano. The judges are also being careful. They want to save their lives and jobs.

Above all, the police and government in Kano want to make an example with the case of Mubarak Bala. They want to reinforce Islamic privilege that holds sway in Kano and Muslim majority states. Muslim authorities want to discourage criticism of Islam and its prophet, apostasy, and blasphemy.

The Islamic establishment in Northern Nigeria has been worried about the rise of atheism in the region. Last year, some Muslims organized a seminar to discuss the emergence of atheism and the connection with social media in Northern Nigeria. The activities of Mubarak Bala and other humanists and atheists were the focus of the meeting.

Muslims in Northern Nigeria are socialized to hate atheists and treat apostates and blasphemers with indignity and disrespect. There is no freedom of religion in the region. As a demonstration of faith in Allah and the messenger, Muslims are taught to persecute and murder infidels and non-believers.  Contrary to what many Muslims say, there is compulsion in the Islamic religion as practiced in Northern Nigeria.

Since the arrest of Mubarak Bala, humanists and atheists have been living in fear of their lives. Humanism has an endangered outlook. Freethought has become a risky undertaking. The future of secularism is under severe threat. Nigerian authorities need to make clear their stand: Is the government for freedom and equality for all believers and non-believers, or repression, oppression, and persecution of atheists and humanists in the country?