IN June of this year, Andrea Minichiello Williams, above, Chief Executive of Christian Concern, gleefully seized upon an incident in which two homophobic ten-year-olds were suspended from classes for five hours for refusing to take part in an LGBT inclusivity lesson at a London school during Pride Month in the UK in 2018.

When bullies know that right is not on their side they resort to coercion and intimidation. That is exactly what is being played out in Heavers Farm Primary School.

It is not the sign of a life-giving ideology being promoted in a school when it has to resort to such heavy-handed and cruel tactics on ten-year-old children to force them to accept something that, instinctively, they do not.

News of Kaysey Francis-Austin and Farrell Spence’s detention quickly reached America and the far right-wing Christian LifeSiteNews leapt into action and launched a petition, which says:

Dear Kaysey and Farrell, Thank you for standing against the LGBT agenda to indoctrinate all public school students with their confusing, sexual propaganda.

It is terrible for people of your age to have to endure such intolerance and bigotry, directed at you from those who should be supporting and teaching you.

But, we stand with you!

Be assured of our prayers for you and your families in this situation and in the future. God bless! 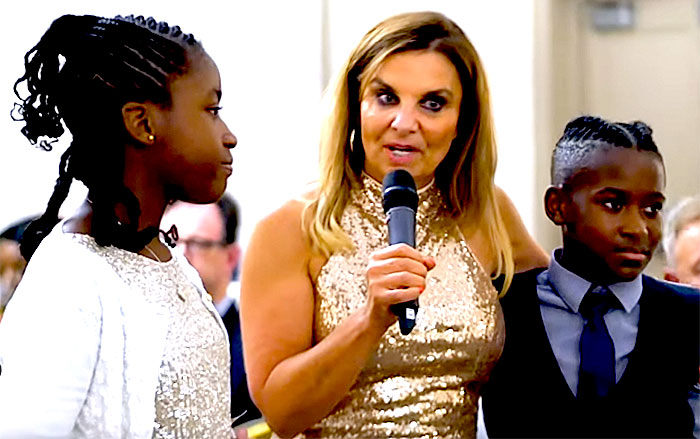 When 33,000 people signed the petition LSN last Friday sent a representative –  Paul Smeaton – all the way to Oxford to give the devout little Christians the petition,where they got to meet the ghastly Williams who hosted a banquet for them.

LSN said in its report of the event:

Christian Concern — the British organization that has been supporting the two pupils since the beginning – took the opportunity to honor Kasey and Farrell for their heroic resistance by presenting our LifeSite petition to them at an annual banquet that they host in Oxford, England. The dinner concludes their week-long ‘Wilberforce Academy’ adult formation course.

Christian Concern campaign on a host of issues close to the heart of LifeSiteNews and our supporters – abortion, euthanasia, marriage, and many others. They also provide legal support to many people suffering unjustly because of their beliefs through their ministry, the Christian Legal Centre.

It neglected to say that Christian Concern loses far more “persecuted Christian” cases than it wins.

LifeSite is proud to have stood shoulder-to-shoulder with Kasey and Farrell, and with Christian Concern. And we thank our many supporters and news subscribers who signed and shared this important petition.

As Paul said in his speech before delivering the petition to Kasey and Farrell: ‘At that moment [when they resisted the LGBT indoctrination], they were in a sense on their own, but what this petition is all about is communicating the truth that Kasey and Farrell are not in fact alone — far from it.’