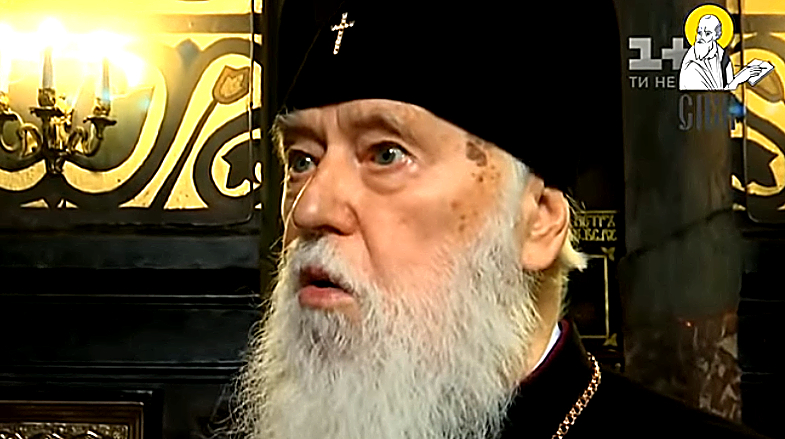 BACK in March the Honorary Patriarch Filaret of the Orthodox Church said in a TV interview that the COVID-19 outbreak was ‘God’s punishment for the sins of men, the sinfulness of humanity. First of all, I mean same-sex marriage.’

The foolish old bigot, according to this report, is now in hospital where he being treated for coronavirus and pneumonia.

Filaret is one of Ukraine’s most prominent religious leaders and has amassed around 15 million followers,

His comments on the causes of the Covid-19 outbreak sparked outrage from LGBT groups who raised concerns about his “harmful statements”.

When challenged on his statements about gay marriage, Filaret’s representatives insisted his views were “consistent with Ukrainian laws”.

The Patriarchate’s press service said in a statement:

As the head of the church and as a man, the Patriarch has the freedom to express his views, which are based on morality,.

The Patriarchate reserved the right to bring counterclaims against those who sought to abuse judicial protections to encroach on Ukraine’s traditional family values.

Same-sex marriage is still illegal in Ukraine and homophobia is rife in the country.

In response to his comments, Maria Guryeva, a spokeswoman for Amnesty International Ukraine, said:

Such statements … are very harmful because they could lead to increased attacks, aggression, discrimination and acceptance of violence against certain groups.

Our aim is to show people that there is no longer place for such statements from church leaders in Ukraine.

He called on faith leaders to promote solidarity based on human rights and human dignity as well as social cohesion, mutual respect and understanding.

Guterres said religious leaders can play “a pivotal role” in their communities and beyond:

To deliver solutions to not only address the pandemic, but to recover better (and) promote non-violence and reject xenophobia, racism and all forms of intolerance.