VENEZUELA’S socialist President has asked the country’s National Assembly to discuss same-sex marriage during its next term beginning in January. His move was reported inspired by Pope Francis’ comments this week supporting civil unions for same-sex couples in a new documenary,

I have friends and acquaintances who are very happy with what the Pope said yesterday. I will leave that task, the task of LGBT marriage, to the next National Assembly.

Meanwhile, there’s flat out hysteria on religious websites over the Pope’s perceived departure from “teaching that has kept the Church united to her Lord for two thousand years.”

Those words, according to LifeSiteNews were tweeted by Michael Heinlein, editor of Simply Catholic. 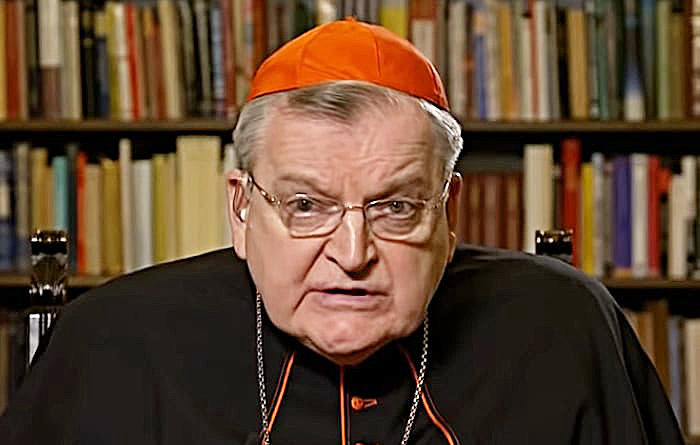 LSN – the Voice of Conservative Paranoia and Homophobia – also published a piece by Cardinal Raymond Burke, above, who said the Pope’s views on civil unions:

They cause wonderment and error regarding the Church’s teaching among people of good will, who sincerely wish to know what the Catholic Church teaches. They impose upon pastors of souls the duty of conscience to make fitting and necessary clarifications.

He continued his florid rant with:

It is a source of deepest sadness and pressing pastoral concern that the private opinions reported with so much emphasis by the press and attributed to Pope Francis do not correspond to the constant teaching of the Church, as it is expressed in Sacred Scripture and Sacred Tradition, and is guarded, protected and interpreted by the Magisterium.

Equally sad and concerning is the turmoil, confusion, and error they cause among the Catholic faithful, as is the scandal they cause, in general, by giving the totally false impression that the Catholic Church has had a change of course, that is, has changed its perennial teaching regarding such fundamental and critical questions.

Evangelist Franklin Graham, above, simply had to stick his nose into the matter, too. The hateful. Trump-lovin’ imbecile insisted that Pope Francis’ support for same-sex civil unions violates traditional Catholic principles. In a lengthy statement shared to his Facebook account, Graham said the Pope’s comments were:

Unthinkable in light of the Word of God. For Pope Francis to attempt to normalize homosexuality is to say that Holy Scriptures are false, that our sins really don’t matter, and that we can continue living in them. If that were true, then Jesus Christ’s death, burial, and resurrection wouldn’t have been needed. The cross would have been for nothing. No one has the right or the authority to trivialize Christ’s sacrifice on our behalf.

Protestants and evangelicals such as Graham have loads of other reasons to detest the Roman Catholic Church. From Pulpit and Pen:

Who hates the Scriptures more than the church of Rome? The Roman Catholic Church has perverted the Grace of God, twisted His Word, and blasphemed His name more than any other religious system in the world. They are the counterfeit version of Christianity, masquerading as the final authority in Christendom while neglecting the very teachings of Christ.

As an LGBT individual, it really bothered me that the pope voiced support for same sex civil unions. First, separate is not equal. Second, we don’t need permission to get married from the leader of an org. that spent decades covering for and protecting child rapists. He has no moral authority.

This was not an announcement to celebrate.

Much of the west has embraced gay marriage, but the pope just now comes around to support civil unions.

Separate is not equal, folks. Let’s not act like this is something to celebrate.

Second. Why the fuck do we need the pope’s permission to legalize gay marriage or get gay married?

The Catholic Church covered up child rape, protected priests who raped children, paid off victims, lobbied against laws that would have given victims more opportunities for justice, etc.
The Catholic Church and the pope don’t have a leg to stand on in terms of moral authority.