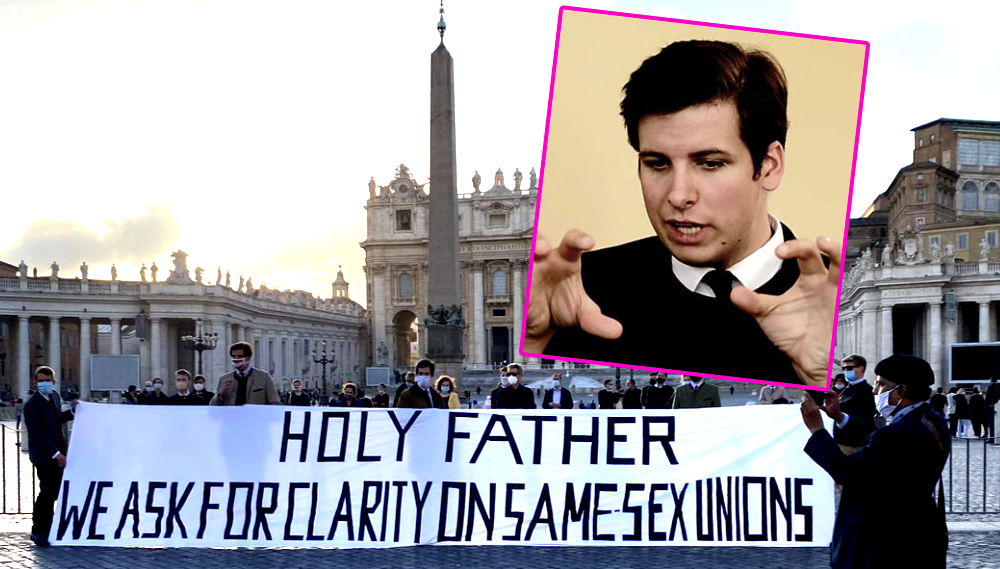 ALEXANDER Tschugguel, inset, above, who gained hero status among conservative Catholics after dunking stolen ‘pagan’ Pachamama statues into the the river Tiber last year, came to the Vatican yesterday (Saturday) with a bunch of ‘confused’ supporters to hold Pope Francis’ arse to the fire over his remarks about same-sex unions in a new documentary.

Ever since Francis was quoted as saying in the documentary, Francesco, that he supported homosexual civil unions, various religious websites have been reporting on outpourings of horror from “old chool” Catholics.

Tschugguel, 27 – a rabid homophobe – is one. He mobilised a bunch of young cronies who gathered in St Peter’s Square in Rome to demanding “clarification” of the Pope’s words.

He is quoted by far-right Christian website, LifeSiteNews, as saying:

Today, we find ourselves here in front of the Holy Angel’s Bridge in front of the Castel Sant’Angelo again. This year, I am standing here because there was an interview published where the Holy Father asked for the introduction of civil unions in different political states.

Tschugguel said such interviews have been a problem since the beginning of the present pontificate for faithful Catholics because the enemies of the Church use them to fight against the faith and advance an anti-Catholic agenda.

For example, the President of Venezuela, Nicolás Maduro, said that now, encouraged through these words of the Holy Father, he’s going to introduce homosexual marriage in Venezuela.

Reflecting on the controversy swirling around Francesco – some allege it was  “selectively edited” and that Francis’ remarks “were not translated correctly,” Tschugguel said:

We ask you, Holy Father, what is the Catholic teaching on homosexual civil unions? 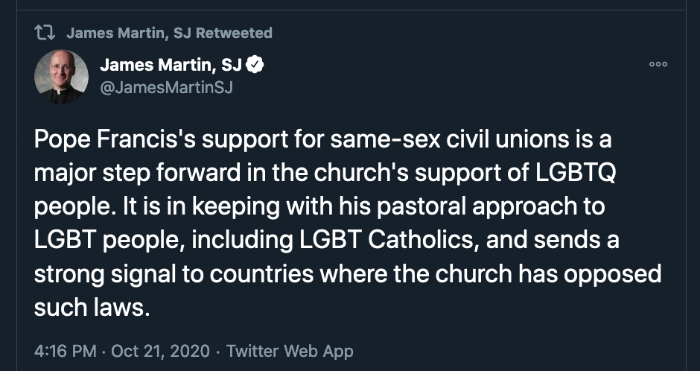 The married Catholic layman said that “gay civil unions” were a “first step” in the LGBT agenda, and alluded to the statement of LGBT activist-priest Fr James Martin, SJ, that Pope Francis’ alleged approval of them “is a major step forward in the church’s support for LGBTQ people.” Tschugguel wondered:

What is the next step?

Tschugguel noted that in the past Pope Francis has spoken out against such LGBT agenda items as homosexual adoption.

Right now, however, the media is telling us he is supporting the ideology, and that this is not good for the reputation of the pope and insults God. It is an offense to God if people use quotes from the Holy Father, his vicar on earth, to fight against the one true teaching.

The young Catholic also quoted from a Congregation of the Doctrine of the Faith’s 2003 document, signed by the then-Cardinal Ratzinger, now Pope Emeritus Benedict XVI, called “Considerations regarding proposals to give legal recognition to unions between homosexual persons.”

He pointed out that there are already measures in place to allow people to choose friends to visit them in hospital or inherit their money.

So what is the reason we should introduce gay civil unions? There is no reason.