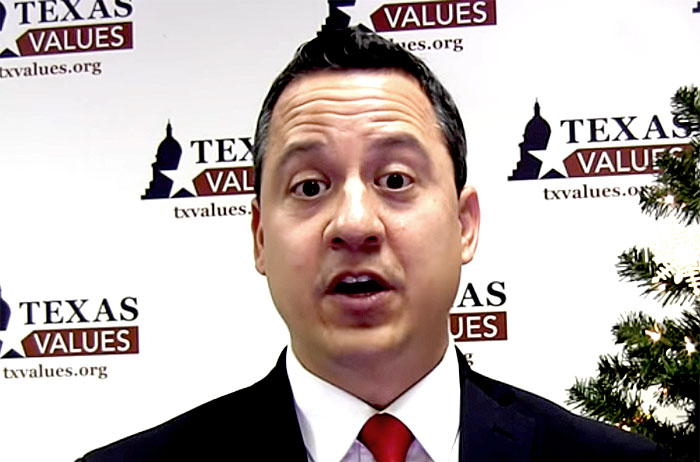 AFTER his wife abandoned him for a woman in 2014, Texas-based Jonathan Saenz abruptly transformed from ‘a socially conservative lobbyist to homophobic firebrand.’

Shortly after, Saenz, above, a devout Catholic, became President of the anti-gay group Texas Values Action, and it was in this role that he strongly supported a “Save Chick-Fil-A” bill that sought to prohibit Texas cities and governmental entities from taking “adverse actions” against businesses that publicly espouse religious convictions.

But House Bill 3172 proposed by Fort Worth Republican Matt Krause was derailed this week. By … titter ye not …a lesbian lawmaker!

State Representative Julie Johnson who delivered the blow to the bill said:

Hopefully, this is the day of discrimination against the LGBT community dies in Texas.

She used a procedural maneuvre to shut down debate bill before it began.

The proposed bill came in response to a decision by the city of San Antonio to deny Chick-Fil-A vendor space in its airport because of the faith-based fast-food chain’s vocal opposition to same-sex marriage.

Saenz had organized a “save Chick-Fil-A” rally at the Texas Capitol last month. His organisation also stationed members and supporters outside the House chamber this week, encouraging members to vote for the measure.

Saenz said his group is not ready to give up on the measure, signaling it might be revived as an amendment to similar legislation that is still working its way through the legislative mill.

This commonsense religious freedom effort is far from over. We will not allow the clear will of the majority of Texans and a bipartisan majority of the Texas Legislature to be thwarted by a few.

Texas Values Action is beside itself with fury over its defeat by LGBTQ activists, describing the killing of the bill as:

A major setback to religious freedom … let’s be crystal clear about exactly why the LGBTQ Caucus, national LGBT advocacy groups, and the hard-Left media are celebrating. They are celebrating because the government can still discriminate against Christians.

They are celebrating because San Antonio has banned a Chick-fil-A because of its financial support of Christian ministries. They celebrate because more and more people of faith, including countless small businesses owners including cake bakers, florists, and photographers, are being punished by government for simply operating their business in line with their biblical values.

LGBT advocates celebrate because they ultimately believe that they can completely silence people of faith – just like you and me.

But while they celebrate today, the fight to protect our First Amendment religious freedom rights and the fight to stop government discrimination against Christians is NOT OVER this session.