AS Malvolio says in Twelfth Night Act 2 Scene V: “Be not afraid of greatness. Some are born great, some achieve greatness, and some have greatness thrust upon them.”

However reluctant Terry Sanderson may have been at the outset to become one of the United Kingdom’s foremost secularists and gay activists, greatness was always destined to come calling sooner or later and his hard-won place amongst the great and the good of the land is well deserved, the result of a lifetime of constant campaigning on behalf of his fellow man and woman.

The Reluctant Gay Activist is an updated and expanded version of Sanderson’s brilliant 2015 memoir The Adventures of a Happy Homosexual, a book rich in both pathos and humour which details the author’s meteoric rise from humble beginnings in industrial Yorkshire to the dizzy heights of Metropolitan fame.

There are many sidesteps and missteps along the way, all told in Sanderson’s self-deprecating but painfully honest prose. Throughout the book there is always the sense that the reader is privileged to be in company of thoroughly decent chap, someone who will make a stand against bullies of any stripe, be they organised religion, the gutter press, the Establishment and its lackeys, all in the cause of equal rights, the abolition of religious privilege, and basic human decency.

To those of us who know Sanderson through only one particular sphere of his activism; journalism, campaigning, or secularism, the book is a revelation. Sanderson is revealed as a man of many parts, one who refuses to back down when faced by entrenched prejudice and homophobia, one who is prepared to make sacrifices for a cause he passionately believes in.

There was a fighting fund… I wondered what I could do to make my contribution to this and eventually decided that I would donate my signed photograph of Marlene Dietrich for auction.

The treasured photograph sells for a derisory £50.

I was reluctant to let it go for such a disappointing amount. It was priceless to me – the divine Dietrich had even written my name on it. But a promise is a promise and the photo went.

Sanderson allows us to share with him the most intimate details of his life as he contemplates the philosophical questions posed by life, death, and the search for meaningful physical relationships.

In a coming-of-age revelation about the workings of the teenage body we are treated to a line that surely ranks with P G Wodehouse at his best, thus Sanderson proudly informs us:

Not all episodes are in such a light-hearted vein:

During the operation my heart stopped. Afterwards the surgeon explained to me that it was because of the vagus nerve being disturbed. After five minutes of cardiac massage by the anaesthetist, the heartbeat returned and I was back in the land of the living.

In an addition to the original book Sanderson bravely recounts his prolonged battle with bladder cancer, yet the indomitable positivity, the geniality persists, buoyed up in part by Sanderson’s devoted husband, Keith, and the refusal to give in to this cruel twist of fate that has marred what should have been a well-deserved retirement.

The Reluctant Gay Activist is a compelling read, a gay Bildungsroman where the hero triumphs over the allied forces of bigotry and prejudice to win the heart of both his husband and the nation – and I do mean hero, for it would take a very jaundiced eye to view Sanderson in any other light.

Many of the freedoms we enjoy today are a direct result of his life-long activism both on his own through his prolific campaigning and journalism and in concert with others through the Campaign for Homosexual Equality and the National secular Society.

Read the book – where else would one encounter an incarcerated bogus Major-General with a penchant for free helicopter flights, Janice of the Heavily Soiled Department, Quentin Crisp, and the logistical nightmare posed by having to carry a freshly severed human leg about in a rapidly disintegrating paper bag?

Stephen Harvie has campaigned on LGBT+ issues for many years. He is a militant atheist, a Humanist, and cat aficionado with a passion for literature, Lesney Matchbox toys, and men in rubber. He lives in London. 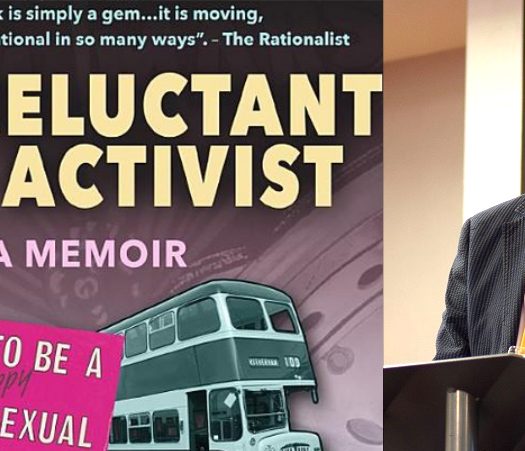