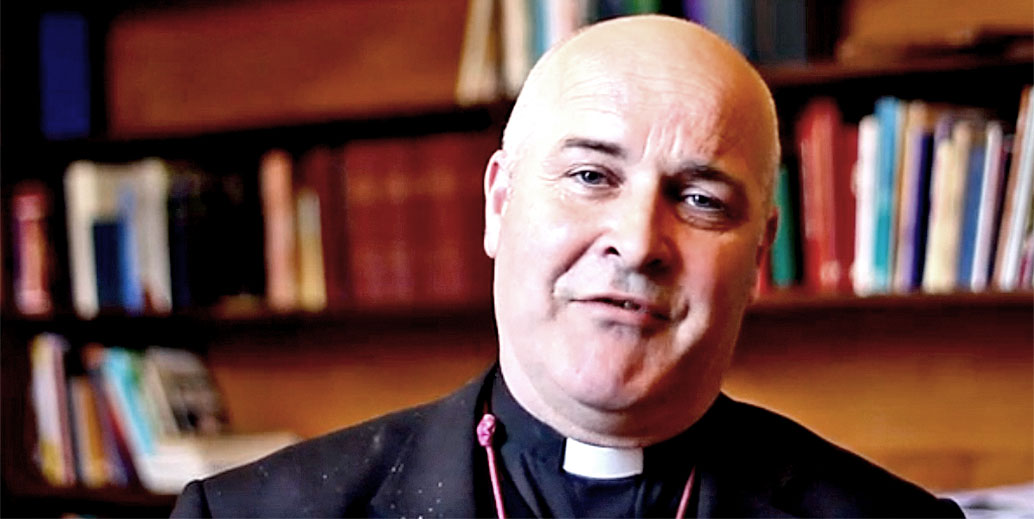 New Archbishop of York, out of touch with the real world, angers Christians and secularists

New Archbishop of York, out of touch with the real world, angers Christians and secularists

IN a scathing attack on the Church of England, Stephen Evans, Chief Executive of the National Secular Society, called for the disestablishment of the church after it was revealed that the newly-appointed Archbishop of York – Stephen Cottrell, above – is dead against the C of E performing same-sex marriages.

The appointment of Stephen Cottrell to the second most senior position in the Church of England is a reminder that our established church retains social attitudes which are out of touch with the views of the British people.

This anti-gay institution shouldn’t lead our national ceremonies, have seats in our legislature or run state-funded schools. It should be disestablished so church and state can go their separate ways.

That the announcement was made by the Prime Minister’s Office highlights again the lack of separation between church and state which holds the United Kingdom back from being a beacon of equality and religious freedom for all.

In February Cottrell successfully intervened in the House of Lords to urge the withdrawal of an amendment that would have allowed the church to accept same-sex marriage without consulting parliament.

The amendment would have removed a legal exemption which currently prevents Church of England and Church in Wales clergy from solemnising same-sex marriages without a change in the law.

Opposition to same-sex marriage is official C of E policy. The amendment would not have required the church to accept same-sex marriage, but would have enabled it to change its position if and when it was ready to do so.

Cottrell, who was bishop of Chelmsford at the time, was acting as one of 26 Church of England bishops who sit in the Lords as of right.

The appointment has also been blasted by UK hate group Christian Concern, which pointed out that when he was bishop of Chelmsford, Cottrell was supportive of a school’s positive handling of a transgender pupil, saying that the school and the diocesan Board of Education “have done right by the child”.

Andrea Minichiello Williams, above, a member of the Church of England General Synod and Chief Executive of Christian Concern said:

Promoting Stephen Cottrell to Archbishop of York makes clear the direction of travel of the C of E.

This is not a bishop who respects Biblical truth when it comes to human sexuality or marriage.

Several clergy in Stephen Cottrell’s diocese are out of communion with him because of his stance on human sexuality. One resigned over this.

For him now to be appointed as Archbishop of York is a final insult to those who want to hold onto Biblical teaching in the C of E.

It is now clearer than ever that the C of E is determined to act in total disregard of those who hold the basic truths that God created us male and female and that sexual expression is reserved for marriage between a man and a woman.

The appointment of Stephen Cottrell as Archbishop of York is another marker in the sad and sorry decline of the Cof E and its willingness to depart from clear Biblical teaching.

The Church Society has also questioned his appointment. In a statement, it said:

Stephen Cottrell is the President of Affirming Catholicism, an organisation which is ‘seeking to bring together and strengthen lay and ordained people who recognize the positive, inclusive and joyful currents in the Catholic tradition of Christianity’.

Among other things, they are seeking to allow same sex marriage and the ministry of people in same sex relationships within the Church of England.

Please pray today that this appointment would not pave the way for such changes to be made.

The Church of England has responded to the criticism in a statement  that said:

He upholds the teaching of the Church of England that recognises marriage as being between one man and one woman.

Bishop Stephen has not endorsed gender transitioning in and of itself for children but has pastoral concern for any child affected by gender dysphoria.

He holds biblical truth as sacred and is in all matters guided by the gospel. Speaking at the press conference for his announcement he said, ‘What binds us together is not our views on this issue or that issue, what binds us together is our faith in Jesus Christ. We say water is thicker than blood. It is our baptism and our belonging to each other that really matters’.