This is something the Nazis did to the Jews

AN openly gay Polish politician – Pavel Rabiej, above, says he will ask prosecutors to investigate anti-gay stickers that a far-right nationalist weekly magazine, Gazeta Polska, plans to distribute to its readers.

Gazeta Polska supports the Law and Justice Party, which is anti-LGBTQ and anti-immigrant.

The magazine said that it will be distributing stickers that say “LGBT-FREE ZONE” and show a rainbow flag with an “X” through it in next week’s issue. They are apparently intended to be used by enterprises that don’t want to engage with LGBT communities.

Rabiej, Deputy President of Warsaw and a centrist, said on Twitter that he would file a complaint with the prosecutor’s office, adding:

Poland’s hate speech law does not include sexual orientation, but Instagram blocked a picture of the sticker, according to Gazeta Polska editor Tomasz Sakiewicz, who said:

Censorship was typical of Nazism, imposing ideology, too.

Georgette Masbacher, the US Ambassador to Poland, denounced the stickers on Twitter.

I am disappointed and concerned that some groups use stickers to promote hatred and intolerance. We respect freedom of speech, but we must stand together on the side of values such as diversity and tolerance.

In mid-March, Church Militant revealed that:

Rabiej is an active homosexual living in a same-sex ‘marriage’ with Michał Cessanis [and that] that the homosexual lobby is very active and keeps attacking from all sides and perspectives. A new pro-homosexual political party, Wiosna, was recently started in Poland.

Read More
It’s just a silly icon, so get over it Poland! 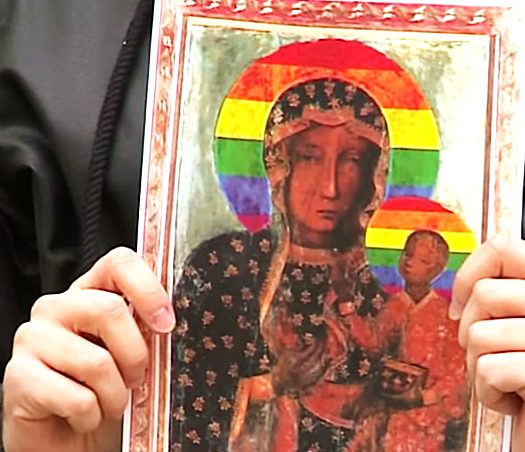