WHEN Justin Trudeau dropped in at the Fountainhead Pub in Vancouver’s West End in advance of the city’s Pride celebration last weekend he made international headlines – and caused lips in conservative circles to curl in distaste.

For example, in reporting the visit Christian hate site LifeSiteNews – which was recently thrown off Apple News for “showing intolerance” – referred to the Fountainhead as “a homosexual haunt” and insisted on putting the words gay and Pride between inverted commas.

Trudeau was Canada’s first sitting Prime Minister to march in a homosexual “Pride” parade in 2016.

The following year, he delivered a tearful apology in the House of Commons for the government’s alleged past discrimination against homosexual individuals in the military or civil service, and his Liberal government agreed to a $145 million out-of-court settlement of a class-action lawsuit launched on their behalf.

Alleged? For pity’s sake, that discrimination was real! Canada has a sordid history of what can be termed as state sponsored homophobia, bi-phobia and transphobia.

Last June, the Liberals passed a bill to expunge records of individuals convicted under Canada’s past law prohibiting homosexual acts. 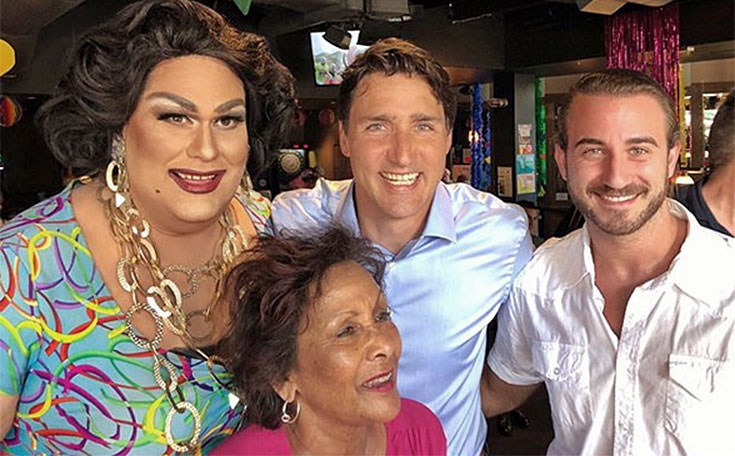 According to Taran Parmar, reporter for City News 1130, Trudeau walked around the pub shaking hands and posing for photos for about fifteen minutes.

Parmar described the scene as:

Lots of cheering, lots of excitement, a lot of people that tried to rush him and take a picture as well as take his hand.

Vancouver is gearing up for #Pride weekend right now, but the spirit of pride and inclusivity is strong here all year long! Thanks to the folks at @fountainheadVAN for the warm welcome today.

Fury erupts over church’s refusal to hold a funeral for gay man&#8217...