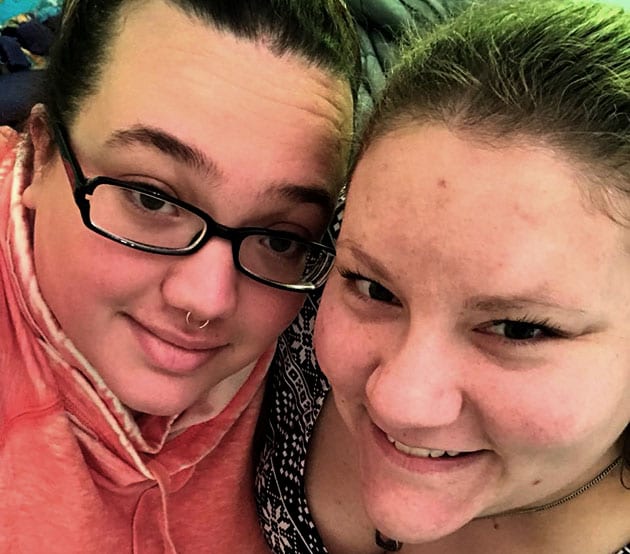 I WRITE a weekly column for the Spanish-based Euro Weekly News, often tacking subjects like homophobia, religious privilege, secularism, atheism and the likes. I rarely provoke outrage, but in March this year I was labelled a ‘rat of the first order’ after the following piece was published:

The number of people using social media runs into the billions, with information now being shared faster and more widely than anyone could possibly be imagined a few years ago.

This means that people with intolerant views who set out to make life a misery for those they disapprove of can instantly be identified and publicly shamed. And rightly so, as was the case recently of a woman who runs a tax consultancy office in Russianville, Indiana.

Nancy Fivecoate, of Carter Tax Service, told a recently-married lesbian couple to sling their hook when they asked her to prepare a joint tax return.

Her reason for turning Bailey and Samantha Brazzel (above) away was that same-sex marriage ran contrary to her religious beliefs.

Normally a case like this would wind up in court, but in this part of the world there are no legal protections for gay people, thanks to the state’s Religious Freedom Restoration Act which allows business owners to cite their faith as a reason to discriminate against LGBT people.

Because they had no legal redress, the couple used Facebook to expose Fivecoate, and were promptly inundated with offers from consultants offering to do their tax return free of charge.

Steve Sanders, an associate professor of law at Indiana University’s Maurer School of Law, applauded the couple’s action, saying ‘The only recourse is good-old fashioned shaming – going on Facebook and telling their friends this is a discriminatory business that people might want to think twice about visiting.’

Ms Fivecoate is now claiming that she’s the victim, and in a statement asked: ‘Why are they trying to destroy my business? I have made no comment on social media. Where is their respect for me and my beliefs?’

That’s the way it always plays out when bigots attract unwanted attention. They automatically shriek ‘persecution!’.

In 2015, Jonathan Brennan suffered similar bigotry when a print shop in Drogheda, Ireland – Beulah Print and Design – refused to print invitations for his upcoming same-sex union with his partner John Kierans, because it too disapproved of gay marriage. It’s no surprise that in this case, the store owners argued that they were being persecuted for their religious beliefs.

Fortunately, Ireland does not allow discrimination of this sort, and the owners of the business were ordered this month to pay Brennan damages of €2,500 by the Workplace Relations Commission (WRC).

I’m delighted that, in addition to the fine, Beulah Print and Design were exposed to criticism on social media. On its Facebook page, which attracted many angry comments, the outfit had the temerity to say: “We are absolutely clear, and have maintained from the outset, that we did not discriminate against our customer in turning down the designing and printing of a same sex wedding invitation. Therefore, we reject the findings of the WRC …”

Feel free to disagree with me, but I firmly believe that if people set out to make a living by providing a public service, that’s precisely what they should do. And if they feel that some of their customers are unworthy of receiving equal treatment, perhaps they should find alternative vocations that don’t bring them into contact with the general public.

Becoming nomadic goat-herders in a remote region of Namibia may suit them better.

I then received an email from someone called Alan Thom, who said that my article “filled him with revulsion”. He added:

How dare you attack a straight person who does not wish to do business with a homosexual.

I am sorry that my article filled you with “revulsion” but a single chicken will provide you with four drumsticks and eight wings before I offer an apology or a retraction.

I grew up in an era in South Africa when services were denied to people of colour. I passionately believed then that racism was utterly contemptible and think the same today. Ditto homophobia. My article clearly pointed out that  people who have businesses have a duty to provide their services to ALL their clients, and if they cannot do so they should find some other occupation. Nowhere did I suggest that gay people should get preferential treatment, just simple equality.

If you think customers who wants their taxes filled in by a professional, or have an invitation printed, or a same-sex wedding cake created should be insulted and belittled because of their sexual orientation, then I can only assume that you are in favour of gross discrimination …

When, for example, it became illegal in the UK for businesses to post “No Irish, No Blacks” notices on their doors and windows, people who belonged in these groups were not “given great latitude”.

They were simply accorded equal rights and given the freedom to exercise those rights. Since then, many countries have, to their credit, passed laws to prevent discrimination against minorities, and if business owners believe they can flout those laws by waving a bloody Bible about and shriek out Jesus’ name, they should be called out, shamed, boycotted and sued. As a militant atheist, I have nothing but contempt for religion, and will express that contempt whenever I see it impinging negatively on people’s lives.

What concerns me most about your email is that you appear to support countries that miserably fail in their duty of care towards their gay and other minority communities. That is deeply worrying and indicative of your approval of their complete disregard for human rights and free speech.

If my “filthy” article about the lesbian couple –  who, incidentally, have thanked me profusely for writing it – filled you with revulsion and rage, I guess my next column about Brexshit and the intolerance, racism and the hatred it has unleashed will send your blood pressure into the stratosphere. Best not read it, eh?

It was the words “militant atheist” that further infuriated Thom.

The most offensive part of your disgusting reply is that you confess to being a militant atheist, @ that you have nothing but contempt for religion. This confirms my opinion of you – a singularly minded  rat of the first order.