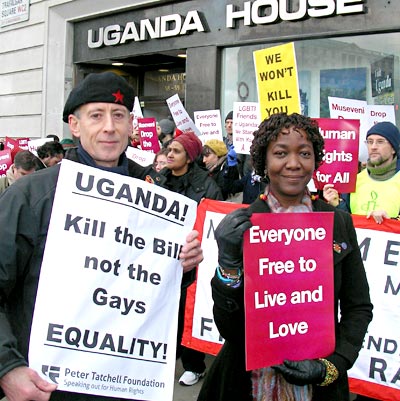 Is Ugandan PM retreating from the ‘Kill the Gays’ bill?

Is Ugandan PM retreating from the ‘Kill the Gays’ bill?

THE Peter Tatchell Foundation issued a statement today saying that the Ugandan Prime Minister, Amama Mbabazi, appears to have distanced himself from his country wicked Anti-Homosexuality Bill.

Human rights campaigner Peter Tatchell, Director of the PTF, suggests that the Ugandan Government may not support the bill in its present form. In the statement, Tatchell said:

THE Peter Tatchell Foundation issued a statement today saying that the Ugandan Prime Minister, Amama Mbabazi, appears to have distanced himself from his country wicked Anti-Homosexuality Bill.

Human rights campaigner Peter Tatchell, Director of the PTF, suggests that the Ugandan Government may not support the bill in its present form. In the statement, Tatchell said:

This may be the reason the bill has not been passed, as expected, in the run-up to Christmas.

It [homosexuality] is unlawful already … Why won’t we support it [the bill]? Because it’s already covered. But there are certain aspects which may be new, like promotion of homosexuality, things like that.

His words indicate that the government of Uganda may not support key sections of the bill but may agree to a crackdown on the promotion and advocacy of LGBT human rights. Caution and scepticism are advisable. This might be a government ploy to diffuse protests and lull LGBT Ugandans into a false sense of security.

There is likely to be a parliamentary majority in favour of the Anti-Homosexuality Bill if it comes to a vote. In this eventuality, the only hope is that President Yoweri Museveni will veto the bill. 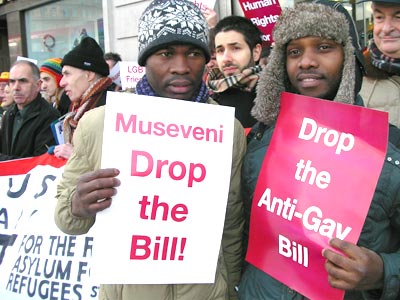 The protest was organised by the UK Consortium on AIDS and International Development, with the support of the Kaleidoscope Trust, the Peter Tatchell Foundation and Ugandan LGBT activists.

It called on Ugandan President Yoweri Museveni and his parliamentarians to reject the bill and stop persecuting LGBT people. A letter of protest was handed in to the High Commission.

We stand in solidarity with Ugandan lesbian, gay, bisexual and transgender (LGBT) people against the draconian Anti-Homosexuality Bill. It is probably the world’s most harsh and comprehensively homophobic law – even more severe than the extreme anti-gay laws of countries like Saudi Arabia and Iran.

As well as the death penalty for repeat homosexual offenders, it criminalises many other aspects of gay life and campaigning. The bill also requires the public to inform on LGBT people, with the penalty of imprisonment if they fail to do so.

This bill is one aspect of a much wider attack on civil society by the Ugandan regime. It is symptomatic of the country’s drift to authoritarianism.

At the London protest, Tatchell and colleagues held placards with the words: “Kill the Bill, not the Gays! Equality!” Other placards urged: “Museveni. Drop the Bill” and “LGBTI friends in Uganda: We stand with you.”

See this statement on the Anti-Homosexuality Bill by Uganda’s Civil Society Coalition on Human Rights and Constitutional Law:

If this bill became law it would be catastrophic for all lesbian, gay, bisexual and transgender people in Uganda and a huge blow for human rights the world over. To persecute, imprison or kill a person because of their sexual orientation or gender identity is abhorrent and a self-evident denial of their basic human rights. We are calling on President Museveni to recognise the profound injustice of this bill and the untold damage it will do both to the individuals it targets so wickedly but also to all the people of Uganda,” said Lance Price, Director of the Kaleidoscope Trust.

The persecution of the LGBT community in Uganda is an assault on the human rights of all Ugandans and is having a catastrophic impact on that nation’s health. The gains made in the response to HIV and AIDS for example, are now being reversed, with a rise in HIV incidence reported in 2011. We therefore call upon President Museveni to act with urgency to ensure this bill is permanently removed from the Ugandan parliament. 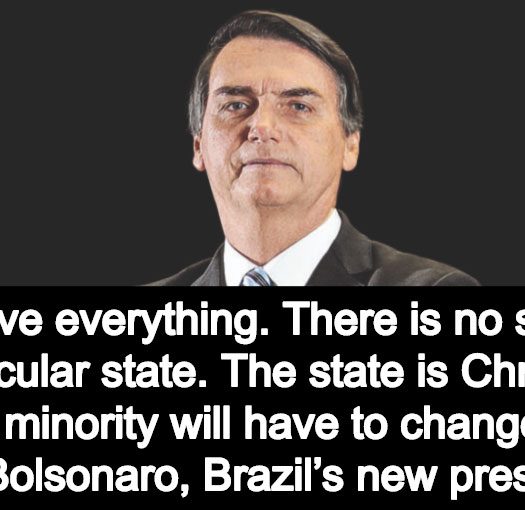 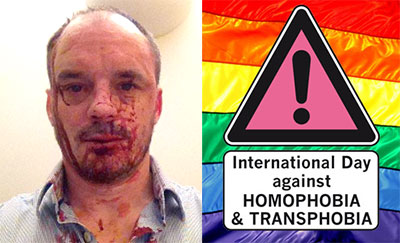