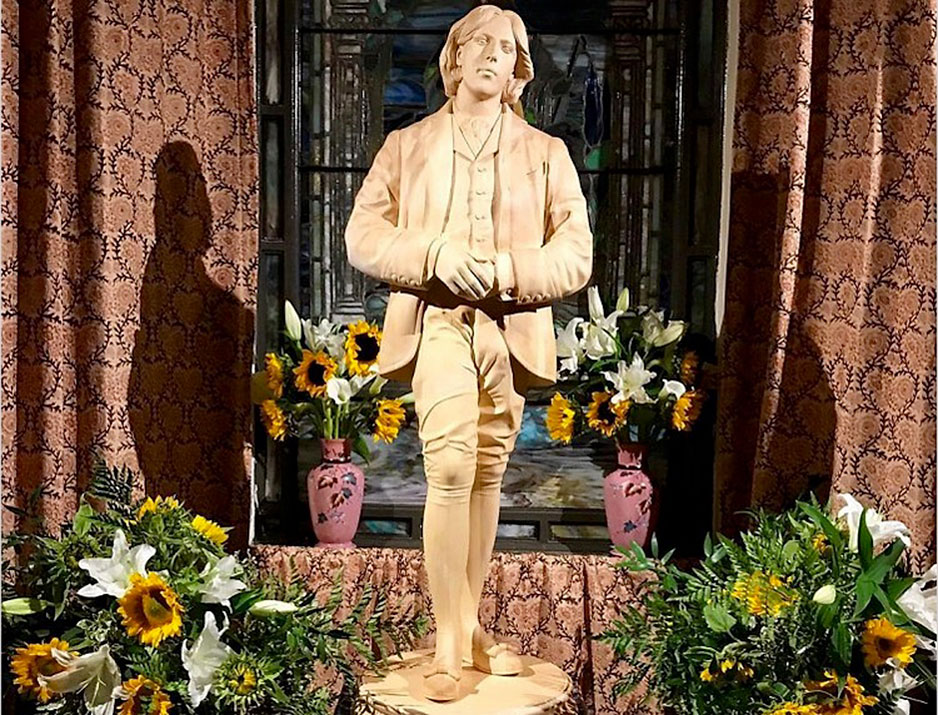 WHEN it was announced last year that a “secular temple” devoted to Oscar Wilde had opened in the basement of a New York church, the Telegraph reported that the project – 20 years in the making by American artists David McDermott and Peter McGough – had been created “to honour a trailblazer of gay rights”.

But if you go to IgnatiusInsight.com – established to assist readers “who wish to learn more about the Catholic Church and her teachings, beliefs, practices, and history” – you will find an interview with Joseph Pearce, a British neo-Nazi-turned-Catholic who, in 2015, published a biography called The Unmasking of Oscar Wilde, in which he insists that it is wrong to call Wilde “a gay icon.”

Here are the opening paragraphs from the interview:

IgnatiusInsight.com: In the Preface to The Unmasking of Oscar Wilde, you write that he “died a pariah” and “was scorned by the world.” But today he is “the adored and idolised icon of a growing cult.” How has that transformation come about?

Joseph Pearce: Basically it goes to show the summersaults that modern culture has made in the last century. Victorian society tended to be prudish and so Wilde, after his fall from favour, was looked upon as a pariah and his works stopped being read. He ended up being looked upon in such a bad way by his contemporaries.

Today the same mistake is being made: Wilde’s work is being judged by the man, not the man by his work. All the things he was detested for in Victorian society – homosexuality, debauchery, and hedonism – have become the things that he is idolised for in our day. He has become a “gay icon.”

It is unfair because Wilde had a lifelong love affair with the Catholic Church. His art is always overtly moral and the morality is overtly Catholic in nature. He is a timeless Christian writer. As a man he never came out of the closet and throughout his life he experienced much guilt about his homosexuality; he always felt that was his bad side. This was the case in The Picture of Dorian Gray, which shows that when you kill your conscience, you kill your soul. Wilde was such a religious man that when he enters the Church on his deathbed, it really is the logical end and culmination of his life.

After the book was published, a number of media reports claimed that it had the effect of turning Wide devotees against the Anglo-Irish genius. Some gay rights activists reportedly said that they had no idea that Wilde, as portrayed by Pearce, was a self-loathing homosexual whose devotion to Catholicism would never have allowed him to become a trailblazer and that they could no longer regard him as a champion of gay rights.

However, according to Wikipedia, Wilde was “likely” to have been a member of England’s first homosexual rights group, the Order of Chaeronea, founded by George Cecil Ives. In 1893, shortly after meeting Wilde, Ives – a friend of Wilde’s whose diaries contain many details of the writer’s life – founded the secret society with the aim of promoting “the Cause”. The society was named “after the battle where the male lovers of the Theban Band were slaughtered in 338 BC”.

The “Rules of Purpose” stated that the Order was to be “A Religion, a Theory of Life, and Ideal of Duty”, although its purpose was primarily political. Members of the Order were ‘Brothers of the Faith’, and were required to swear under the “Service of Initiation”, that “you will never vex or persecute lovers” and “that all real love shall be to you as sanctuary.” The group was male dominated, but did include a few lesbian members. At its peak “the Elect” numbered perhaps two or three hundred, but no membership lists survive. Oscar Wilde was, however, likely an early recruit, along with Lord Alfred Douglas “Bosie”.

Ives was keen to stress that the Order was to be an ascetic movement, not to be used as a forum for men to meet men for sex, although he accepted a degree of “passionate sensuality” could take place. He also believed that love and sex between men was a way to undermine the rigid class system, as a true form of democracy.The secret society became a worldwide organisation, and Ives took advantage of every opportunity to spread the word about the “Cause.”

In Ives’s words: “We believe in the glory of passion. We believe in the inspiration of emotion. We believe in the holiness of love. Now some in the world without have been asking as to our faith, and mostly we find that we have no answer for them. Scoffers there be, to whom we need not reply, and foolish ones to whom our words would convey no meaning. For what are words? Symbols of kindred comprehended conceptions, and like makes appeal to like.”

Alison Gingeras, who organised the project at New York’s Church of the Village, clearly does not see Wilde though Pearce’s Catholic-tinted specs. She said in the Telegraph report: “He invoked all of us to rebel, that it was the inherent quality of human beings to be rebellious, to move society, to be individual.

And in a Vox.com report she added: “I think Oscar Wilde transcends identity politics,” pointing to what she saw as his history of progressive values throughout his life. “[He represents] the inherent quality of human beings to be rebellious.”

She noted that in the 1970s, “Avenge Oscar Wilde” had become a mantra of LGBTQ liberation. Perhaps, she said, it was time to resurrect it.

For the temple’s creators, Wilde is an “elder” in a tradition far broader than the fight for LGBTQ equality. Rather, they see him as an iconic representative of the right to define – and defend – one’s own identity, regardless of societal pressure to the contrary.

The official Oscar Wilde Temple’s website, adds: “Wilde’s example as an enemy of homophobia remains a bellwether of modern activism and is the basis for McDermott & McGough’s installation, which combines painting, sculpture, and site specific elements in a functioning environment that recalls the beautiful and provocative sensuousness of the Aesthetic Movement Wilde championed.”

Vox.com reported that McDermott and McGough had created “a religiously themed installation” at the centre of which is a statue of Wilde. This makes him “a figure of worship whose name has become synonymous with LGBTQ liberation.

“A series of paintings modeled after the traditional Christian stations of the cross – representing different moments in Jesus’s trial and crucifixion – tell the story of Wilde’s 1895 trial for ‘gross indecency’ (ie, homosexuality) and subsequent two-year imprisonment. In each panel, all of which are modeled after then-contemporary newspaper engravings of the trial, Wilde sports the gilded halo of Christian iconography.”

Pearce has a somewhat different view of Wilde’s prosecution. In his Ignatius interview he said: “People today think that Wilde was persecuted for his homosexuality. No, he was not! It was almost unheard of for people to be charged with sodomy in Victorian England.

“Wilde was having a homosexual relationship with Lord Alfred Douglas, whose father, the Marquess of Queensberry, became enraged, left a card for Wilde: ‘To Oscar Wilde, posing as a Somdomite [sic].’ Infuriated, Wilde had Queensberry arrested and charged with criminal libel. It was a huge mistake. Wilde failed in his libel case and the evidence brought forward by Queensberry about Wilde’s homosexual activities essentially forced the government to prosecute Wilde.

“So Wilde was brought down by his own stupidity, not because he was unjustly persecuted. There’s the moral of The Picture of Dorian Gray: Kill your conscience, kill your soul. Wilde, in fact, called his homosexuality his ‘pathology’, his sickness.”

But For the temple’s creators, according to Vox’s Tara Isabella Burton, “Wilde is an ‘elder’ in a tradition far broader than the fight for LGBTQ equality. Rather, they see him as an iconic representative of the right to define – and defend – one’s own identity, regardless of societal pressure to the contrary.”

According to a Vice report, McDermott and McGough’s see him as an iconic representative of the right to define – and defend – one’s own identity, regardless of societal pressure to the contrary.”

The Vice website said McDermott and McGough’s Oscar Wilde Temple also commemorates those who were murdered or died for their “sins”, among them Harvey Milk, California’s first openly gay politician, elected to San Francisco’s Board of Supervisors and gunned down in its City Hall; Brandon Teena, a transgender man in Nebraska whose life and death – raped, strangled and dumped in the boot of a car in 1993 – was turned into the movie Boys Don’t Cry; and Alan Turing, the brilliant computer scientist and codebreaker who helped Britain to win the war, but would be rewarded for his service with an arrest on charges of “gross indecency” in 1952, and who avoided imprisonment only by accepting hormone treatments, which destroyed his libido, and he mysteriously died just two years later from cyanide poisoning.

Turing’s inclusion in the work is a stark reminder that, in 1950s Britain, “inverts” were still considered criminals, and the artists’ summoning of 1917 aligns with a point in time, a half-century later, when homosexuality would be decriminalised in that country, and the organisers are to be highly commended for plans to bring the Temple to London, where it will be recreated later this year at Studio Voltaire.

This is by no means the only tribute organised in the UK to honour Wilde. Former Shakespeare’s Globe artistic director Dominic Dromgoole announced in 2017 a quartet of Oscar Wilde productions for his new company, Classic Spring. The Oscar Wilde season kicked off at the Vaudeville Theatre last October with A Woman of No Importance, directed by Dromgoole and starring Olivier Award-winner Eve Best (Love in Idleness). This was followed by Lady Windermere’s Fan, directed by Kathy Burke. It opened on January 12 and will run until April 7.

The other two productions will be An Ideal Husband and The Importance of Being Earnest, with details on dates, cast and creatives to be announced at a later date.

An adaptation of De Profundis, Wilde’s letter to Lord Alfred Douglas from Reading Gaol, by Frank McGuinness ran from January 3–6 and starred veteran British actor Simon Callow. Dromgoole said: “Oscar Wilde was more of a natural rebel and iconoclast than people usually give him credit for . . . he was extraordinary, an anti-authoritarian and debunker of all prejudice.”

He added: “It has always been my pleasure and privilege to support the voices of writers, whether new writers at the Bush, the Old Vic or the Globe, or Shakespeare, the mainspring of our theatre culture.
“This is a wonderful chance to present the work of more writers, who still speak to us piercingly and profoundly today.” 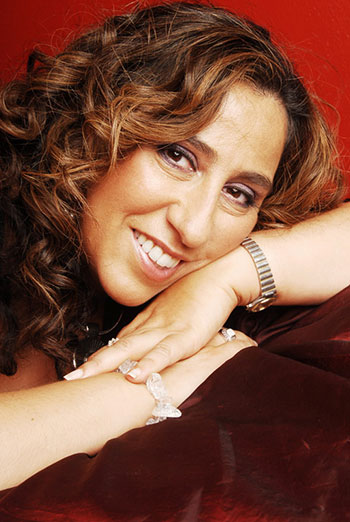