PROGRESSIVE worshippers disenchanted with a Fr George Kuforiji, a Catholic priest at St Francis of Assisi parish in Portland, Oregon, shouted him down while he was celebrating Mass.

Since his appointment last year, Nigerian Kuforiji, a native of Nigeria, has reportedly been trying to bring his flock more in line with traditional Catholic teaching.

Angry parishioners outside the Portland church. Image via YouTube,

But his congregation is having none of this “back to basic” malarkey, and the priest found himself confronted by mainly elderly parishioners wearing white and bearing protest signs.

The loud, grey-haired protesters filed into the central aisle and marched forward while Kuforiji tried to continue the celebration from behind the altar. Some banged tambourines or shook rattles in the church.

We are following the voice of Jesus, of love. Jesus of inclusion. Jesus of resisting the authorities because when we resist the law, we are in the Spirit of God.

Pittman then went to the pulpit to air grievances against Archbishop Alexander Sample and Kuforiji. She said parishioners are:

Being abused in the Catholic Church by this priest and by this archbishop. 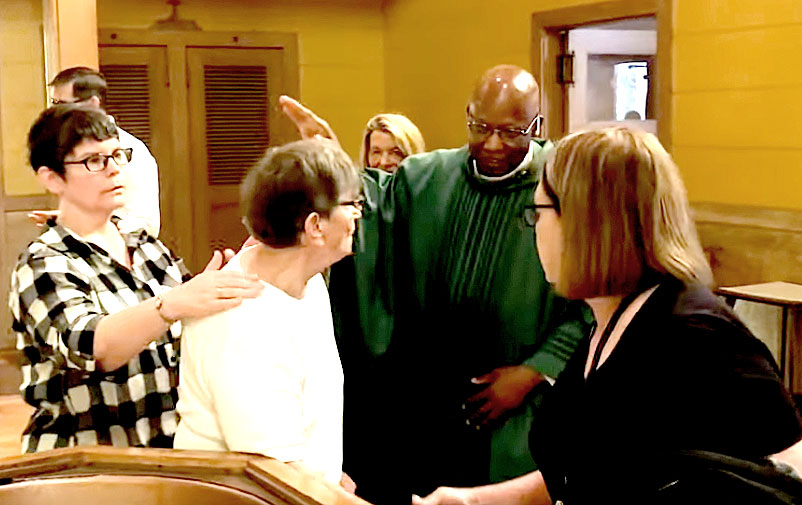 The priest gets an earful from one of the protesters. Image via YouTube,

The protesters ended their disruption of the liturgy by locking arms and singing the Civil Rights-era anthem, “We Shall Overcome.”

Members of the parish council and other parishioners have questioned Kuforiji’s leadership and reforms. One of his unpopular moves was to ban “inclusive language” in Scriptural readings used in the parish. Other “reforms” he introduced was to remove a hand-woven Guatemalan cloth that had been used on the altar, replacing it with a plain white altar cloth as prescribed for use in the Catholic Church.

He also removed photographs of homeless people that had decorated the interior walls of the church and threw out a cloth decorated with rainbow colours.

Parishioners have marched in the Portland Pride parade, fed and given shelter to people experiencing homelessness and worked to make the traditionally patriarchal institution more inclusive of women. For several years, a banner hung above the church steps that read “Immigrants & refugees welcome. Now the banner is missing. 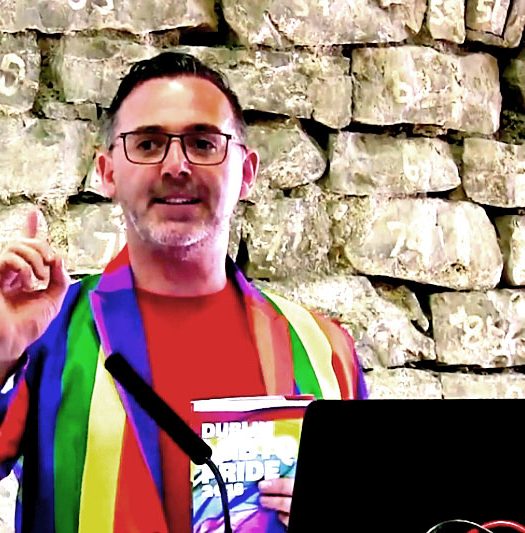