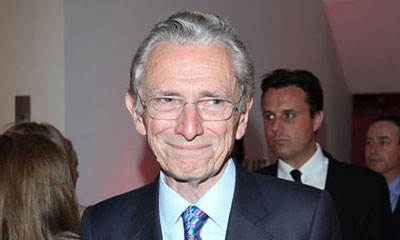 FOLLOWING a passionate speech he gave last October in the House of Lords in which he linked the persecution of millions of gay people to the spread of AIDS, Lord Fowler this week told fellow peers that they should support equal marriage because:

Parliament should value people equally in the law, and that enabling same-sex couples to marry removes the current inequity.

FOLLOWING a passionate speech he gave last October in the House of Lords in which he linked the persecution of millions of gay people to the spread of AIDS, Lord Fowler this week told fellow peers that they should support equal marriage because:

Parliament should value people equally in the law, and that enabling same-sex couples to marry removes the current inequity.

Speaking yesterday, the Tory peer reflected on his experiences at visiting HIV and AIDS programmes in the Ukraine and Russia and his shock at the:

Widespread intolerance and prejudice towards gay and lesbian people.

Lord Fowler also argued that as the democratically elected House of Commons has already voted in favour the bill in a free vote, the unelected House of Lords should not prevent the bill from being passed into law.

There have been calls that it [Marriage (same sex couples) Bill] should be put off or withdrawn … Let me suggest in principle why it would be quite wrong for this Bill to be put off or withdrawn. I entirely respect the deeply held religious views of those who are opposed. I underline that. I do not want to set out cases as if this is a Second Reading debate. That is to come.

Suffice it to say at this stage that my personal view is that Parliament should value people equally in the law, and that enabling same-sex couples to marry removes the current inequity. A legal partnership is not seen in the same way and does not have the same promises of responsibility and commitment as marriage.

There are many same-sex couples, including those working in the churches, who view marriage as fundamentally important and want to enter into that life-long commitment. It is therefore Parliament’s duty to enable that to happen, and in so doing strengthen the society in which we live today.

However, the fundamental point that I want to make is not that. I want to see this country setting an example of equality of treatment in a world where discrimination, prejudice and stigma are rife and are quite probably increasing. Let me explain in a few words why I feel strongly about this. Over the past months I have visited a range of cities and countries around the world looking at the HIV/AIDS position.

Whether I have been in Ukraine or Uganda, what has shocked me most – perhaps even more than the deaths, which at least I was expecting—has been the widespread intolerance and prejudice towards gay and lesbian people.

An opinion poll in this country suggested that many Christians in Britain believed that they were a persecuted minority. I can only say that if anyone wants to see a persecuted minority they should look at the plight of gay, lesbian and transgender people around the world. As you travel you go to countries where homosexuality is a criminal offence and where people who are suspected of being homosexual are persecuted and even forced to leave their family homes.

In one country a newspaper was dedicated to exposing homosexuals—to identifying them, photographing them and publishing their addresses—so that the local population could take action against them. In one case, this led to a murder.

You can go to countries where the most popular political cause is to toughen up the laws against homosexuality rather than to modify them. Action of that kind has been taken in Russia, while in Kampala a Private Member’s Bill promised capital punishment – now generously reduced to long imprisonment – for aggravated homosexuality and a penalty of imprisonment for those who suspected that someone was homosexual but failed to report it. You may feel that that kind of Bill would be thrown out. Not at all; the common view is that it will be passed.

I do not think that one Act passed by this Parliament or one action will suddenly bring the walls of discrimination crashing down. There are certainly actions that will help – not least, if I may say so to the Bishops’ Bench, ensuring that the churches in sub-Saharan Africa, including the Anglican Church, take a stand against what is happening there.

In some parts of the world what Parliament does may have some persuasive influence – probably not in Russia and Ukraine but quite possibly in the countries of sub-Saharan Africa. It can have influence for this reason: the criminal laws against homosexuality were introduced into those African countries by British Governments in the days of the Empire. We were the authors; we set out what the standards should be. It remains the case that 42 out of 54 Commonwealth countries criminalise same-sex relations. We should remember that it was as late as 1967 when the law here was changed. Until then people could be imprisoned.

Even here, not all the antipathy to gays has been removed – not by a long chalk – but unquestionably the law has played its part in improving the position. The Bill, which will be debated later, is not only right but could have an important persuasive effect both in this country and abroad, and will set out our belief in equal and fair treatment.

As for the later debate, we should also remember, just as we remembered on the position of the press, that the Bill for equal marriage was passed overwhelmingly in the other place on a free vote, by 400 votes to 175: a majority of over two to one.

On October 25 last year, Lord Fowler told the House that:

One hundred and seventy million people are living under conditions where they are at the risk of persecution on account of their sexual orientation, and 76 countries criminalise consensual, adult, same-sex relations, among them 42 of the 54 countries of the Commonwealth.

I want to concentrate for one moment on some of the consequences that that discrimination can have. As perhaps one or two Members of the House know, I seek to work and help in the HIV/AIDS area and will just remind the House of the position there. Some politicians talk, optimistically, about a cure, but the fact is that almost two million people a year die from AIDS. For every person put on treatment, two new people are infected. Hundreds of thousands of people do not get the treatment they need, or come to it too late for it to be fully effective.

Consider what effect discrimination can have in that context. If there is the threat of criminal sanction, people do not come forward for testing, let alone for  treatment. The result is that HIV spreads. Health providers are obviously less likely to offer their services if they can be accused of aiding a crime. The laws are often used by the police to prohibit HIV prevention activity. That is a disastrous position. I must add that it is by no means restricted to developing countries.