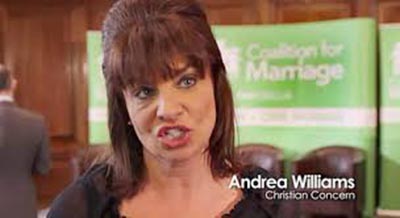 DEMENTED Christian hatemonger Andrea Minichiello Williams, the founder of Christian Concern has infuriated gay rights campaigners by urging Jamaica to keep same-sex intercourse illegal and suggesting  that Tom Daley is in a relationship with a man because his father died.

DEMENTED Christian hatemonger Andrea Minichiello Williams, the founder of Christian Concern has infuriated gay rights campaigners by urging Jamaica to keep same-sex intercourse illegal and suggesting  that Tom Daley is in a relationship with a man because his father died.

Williams, according to this report, spoke at conference in Jamaica to lobby against the repeal of the Caribbean island’s controversial law banning gay sex.

The crazy fundamentalist, an elected member of the Church of England General Synod, the body which creates church law, reportedly said that Jamaica had the chance to become a world leader in battling foreign pressure to decriminalize same-sex intercourse. She blathered:

Might it be that Jamaica says to the United States of America, says to Europe, ‘Enough! You cannot come in and attack our families. We will not accept aid or promotion tied to an agenda that is against God and destroys our families.

She argued that it’s a “big lie” that homosexuality is inborn and blamed the “lack of the father” and “sometimes a level of abuse” for creating homosexual feelings.

She reportedly illustrated  this by pointing to Olympic diver Tom Daley who came out as gay earlier this month. She is said to have added that he is “loved by all the girls and had girlfriends” and had “lost his father to cancer just a few years ago”.

Yesterday Martin Warner, the Bishop of Chichester, where Mrs Williams was elected to the General Synod in 2011, condemned the comments.

He told the Independent that they had “no sanction in the Church of England” and that they:

Should be rejected as offensive and unacceptable.

Gay rights charity Stonewall said it was “sad” that Mrs Williams was:

Supporting the prosecution of gay people simply for how they were born.

Endorsing its laws on gay sex, he said, amounted to supporting:

The vilest form of homophobia in a most terrible cultural situation.

Williams is also the founder of the Christian Legal Centre, which funds high-profile cases “to protect the freedoms of Christians in society”. These include the failed 2012 appeal by Lesley Pilkington, a therapist struck off after offering to “cure” an undercover reporter who was posing as a gay patient.

Christian Concern said Mrs Williams was “unavailable due to a private matter” yesterday.

Next month she is set to address conference for the “ex-gay movement”, which is set to discuss controversial gay-to-straight conversion therapy  at Emmanuel Evangelical Church in Westminster

According to the conference website it seeks to protect “the freedoms to believe, to exist and to change when homosexual feelings are unwanted.”

Williams will be joined on a panel by Dr Michael Davidson, the founder of the Core Issues Trust, who in the past has described homosexuality as a “developmental aberration”. But Dr Davidson told the Independent he did not view “homosexuality as a disease”.