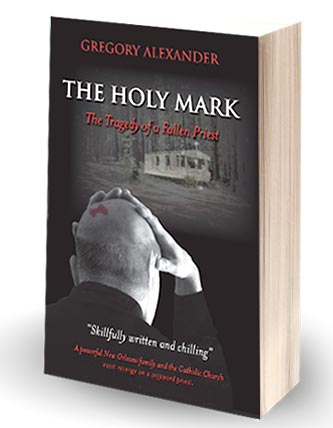 THE protagonist and authorial voice of The Holy Mark, Joe, is a man marked for the Roman Catholic priesthood – quite literally – by the birthmark on his scalp, which his immigrant Italian-speaking grandmother declares is a “segno sacro” – a sign from God that this particular grandson is destined for the Church.

Thus begins the tragicomic tale of the innocent and plump little gay boy, drawn inexorably towards the priesthood, via an intricate web of family jealousies and rivalries, an uncommon intelligence, and an often thwarted talent for teaching teenaged boys. All of this is subtly directed by the manipulative church hierarchy of the local New Orleans diocese, with the corrupt Bishop Franklin Ratchett firmly in the pocket of Joe’s scheming Uncle Anthony, whose name Joe assumes when he joins the priesthood.

As “Father Tony”, Joe soon becomes a thorn in the side of his uncle, thwarting his uncle’s plan to usurp more than his fair share of the Miggliore family’s fortune by extracting a bogus last will and testament from the aged matriarch, Grandma Miggliore, as she lies on her deathbed hallucinating about the Holy Family. Needless to say, Bishop Ratchett is in on his uncle’s nefarious plan, being a skilled networker among New Orleans’s successful businessmen and lawyers, knowing that the diocese benefits handsomely from their donations, provided he is willing to do their bidding.

Joe loathes his greedy uncle, and also his Aunt Rose, referring to her as “the fish-wife” on account of her conspicuous wealth coming from her successful husband’s fish business. It is she who eventually dupes Joe’s mother into handing over most of her rightful inheritance, leaving Joe’s financial future uncertain and dependent on whatever demeaning employment is meted out by the vengeful Bishop Ratchett and his minions, forever in cahoots with Joe’s grasping uncle.

Joe, or Father Tony, has no illusions about his extended family, indeed his very survival comes to be driven by a seemingly “un-Christian” enjoyment of their misfortunes and his own desire for revenge, as well as a hatred of the Church and the pinched, invariably deformed characters who run it. He delights in his “fish-wife” aunt’s misfortune when the expensive plastic surgery that was supposed to cure her unfortunate resemblance to the hook-nosed Grandma Miggliore, is more than undone by aggressive facial cancer. He is even more delighted when she survives the cancer just long enough to bury her own gay son, Ronnie, who died from AIDS. Although the book’s first-person narrative and deliciously sardonic humour inevitably pushes the reader into siding and identifying with Joe, this isn’t always a comfortable experience.

These themes of disfigurement, disease, and unattractiveness are the warp and weft of The Holy Mark. This starts with Father Tony’s low self-esteem; the self-consciousness from the birthmark on his scalp (which tingles and throbs when he is sexually aroused), his weight and his self-perceived lack of desirability; but this theme also extends to those around him. His nemesis, Bishop Ratchett, has a deformed hand, which is likened to a mace; the sadistic priest, Father Pedeaux, in the seminary where Father Tony prepared for the priesthood, is described as an “anorexic skinflint”, the withered specimen evidently determined to force his own anorexia on the younger priests by affording them only the most meagre of rations in the refectory where he lords it over them. The aged nuns in the care home where Father Tony is forced to work at one point are all in various stages of dribbling, shuffling decrepitude. Eventually, AIDS claims the life of his effeminate bitch-queen cousin, Ronnie.

All of this contrasts markedly with Father Tony’s rhapsodic and forensically detailed descriptions of youthful male beauty and virility. His sexual epiphany begins in early puberty with his athletic cousin, Tony (son of evil Uncle Anthony), behind the levee of the Mississippi. When diving off the roof of an abandoned river tug, safely in the muscular arms of his fearlessly naked older cousin, Joe spontaneously ejaculates. However, he must compete for the attentions of Tony with his queeny, prancing cousin, Ronnie. Nonetheless, Joe remains “pure”, a virgin until his thirties, by which time he is surrounded by the raw beauty of youth at “the Den”, a Catholic residential home for disadvantaged and troubled teenaged boys. Ironically, Bishop Ratchett and his minions intended this post as a punishment for thwarting their attempted death-bed heist, but this first posting brings Father Tony new purpose and fulfilment for the several years he is there during the 1970s.

Though challenging, the dozen boys in his charge come to accept him and even compete for his attention and tactile affections. Here, for the first time, he finds himself answering a personal calling, a sense of doing something useful, turning around young lives for the better.
It is also here that, by chance, he is gently seduced by one of his more troubled charges, Jason, who climbs into Father Tony’s bed, making it clear that he needs to feel loved, expressed through sexual comfort, which after some hesitation, Father Tony supplies. Though technically “child abuse” and certainly an abuse of his “position of trust”, there is nothing here to suggest that Jason is anything other than the willing initiator.

Thus begins Father Tony’s occasional servicing of some of the boys’ sexual needs, albeit with a light touch and exclusively orientated towards their gratification and relief, never his own. In a very Catholic way, he convinces himself his actions are selfless and godly. To his mind, he is “walking in Christ’s footsteps” by taking the supposed sins of the boys upon himself, absolving them of guilt, making them happier, better human beings. Father Tony’s passion is “a passion of sacrifice, not of salaciousness”, one that ultimately leads to his undoing – his symbolic crucifixion.

This is certainly challenging to the received wisdoms of our time, when man–boy love is unerringly taboo, even while man-on-man love is increasingly accepted and officially sanctioned. Through Father Tony’s eyes, at least, there is something pure, noble, and selfless about what he is doing. If we take Father Tony at his word (or the author’s word), then this is something very far removed from dominant narratives of perverts in the depraved Catholic clergy preying on children and ruining lives. On the contrary, in this instance, man–boy love, or priest–boy love, is portrayed as something harmless, consensual, even healing. This very much runs counter to the self-serving stance of hard-nosed secular opportunists – always keen to find a new stick with which to beat the Catholic church – or, indeed, the kind of androphobic feminists who fear and despise male sexuality per se and who would insist that all man–boy love is, by definition, abusive. 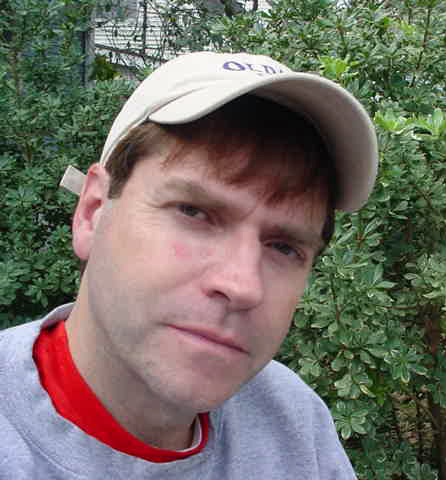 How much of The Holy Mark is simply fiction, and how much is an attempted defence of man–boy love by the author, Greg Alexander, left. only he knows. The rest of us can only guess. The author, like his protagonist, “has experience of teaching in several Catholic schools” and “lives outside New Orleans”. Choice biblical verses are pressed into service to add a sense of divinity to man–boy love, which, parachuted in to this unconventional narrative polemic, they sort of do, albeit with a large helping of wishful reinterpretation. This part of the book deals with that period of American gay history – the 1970s – when man-boy love was a hot political issue and grist to the mill for the religious right of the nascent Reagan era.

The author would have lived through this febrile period of American sexual politics. Of course, one should never confuse the author of a book with the characters he creates, any more than one should confuse an actor with the roles he plays.

Part of the book’s purchase on the reader is the way it challenges and ruptures the received assumptions of our times. Father Tony clearly deplores child sexual abuse – he tries to help a boy whose family has been destroyed by his father sexually abusing his own daughter, causing her to try to take her own life.

Nonetheless, he puts his own sexual encounters with teenaged boys in a more rarefied and spiritually elevated category. The reader can take Father Tony at his word, or, more cynically, may see him as conveniently self-deluding. Sean, the boy whose father abused his own daughter, is also the recipient of Father Tony’s “healing ministrations” during a Catholic summer camp, but soon after, Sean takes his own life. Father Tony puts this down to the legacy of the father’s behaviour and the Church’s unsympathetic response to the discovery of his sexual liaison with Sean (via the boy’s confession), never pausing to reflect whether the liaison itself may have been a factor in the troubled boy’s suicide.

Likewise, his cousin Ronnie is portrayed as a contemptible vacuous queen (he fails as a dancer, so becomes a hairdresser instead, helping Father Tony disguise the birthmark on his scalp). Because he is unashamedly promiscuous and frivolous, participating in “gay carnivals”, Father Tony evidently sees him as somehow deserving of his eventual fate. Of course, the reader is perfectly entitled to think otherwise, that – unlike Father Tony – Ronnie might just have been living his life openly and honestly as a determinedly camp and “out there” gay man, doing his best to get by with the cards he’s been dealt.

The Holy Mark is a brave and very honest book and might easily offend the sensibilities of those wedded to rigid ideologies, whether the reader is right-wing, left-wing, Catholic, atheist, feminist, or gay. The characters are also given free rein to express their ambivalence towards black people, or “negroes” as they are referred to here (the story is set in the deep South of the USA, after all). But none of this should detract from the sheer enjoyment of this book. In fact, it probably adds to it. Written in the first person singular, or, rather, first person desperate, The Holy Mark is, by turns, confessional, witty, despairing, well-observed, and not a little creepy – but always, always gripping. An enjoyable read, with an uncompromisingly clear, charismatic, and painfully honest voice.

The Holy Mark is available here. 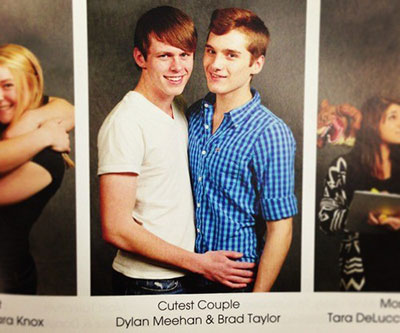 US school ‘Cutest Couple’ prize goes to a gay pair 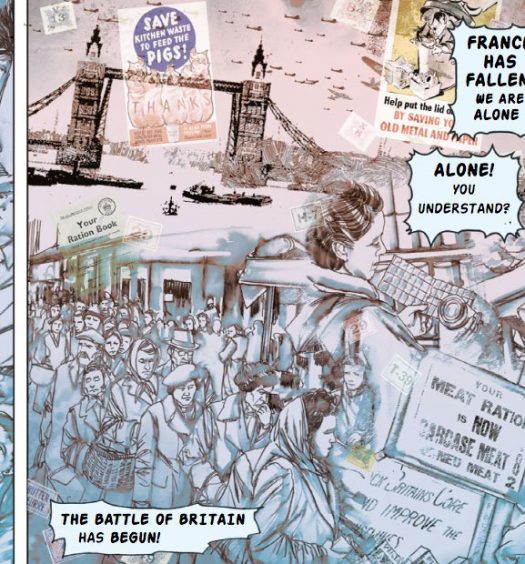