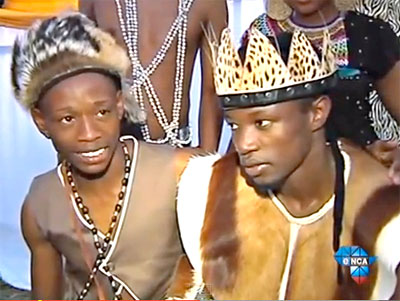 Being gay is not ‘un-African’ say SA couple

Being gay is not ‘un-African’ say SA couple

TWO South African men who committed to one another at a wedding ceremony on April 6 are hoping that their marriage will help change the perception that being gay is “un-African”.

One of the pair, Tshepo Cameron Modisane, said their union was a challenge to the idea that:

TWO South African men who committed to one another at a wedding ceremony on April 6 are hoping that their marriage will help change the perception that being gay is “un-African”.

One of the pair, Tshepo Cameron Modisane, said their union was a challenge to the idea that:

According to this report, Modisane and Thoba Calvin Sithole, both 27, met several years ago while studying in Durban, but lost contact with each other. A chance meeting in a gym in the suburbs of Johannesburg led to them becoming training partners, then a couple. After three years as boyfriends Modisane proposed in June 2012.

The pair were married in a ceremony drawing on traditions from both Modisane’s Tswana and Sithole’s Zulu ancestry. Both wore traditional regalia, asked their ancestors for blessing, and a cow was slaughtered. Gifts were presented to the parents of both men as thanks for raising them. (Watch the video here).

People are still ashamed because the vast majority of the black community is not accepting of being a homosexual. They see it as largely being a ‘Western trend’ that is in fashion lately.

The view that homosexuality is a Western trend is often promoted by media and politicians in Africa, with perhaps the most notable recent example being the Ugandan President blaming European culture for encouraging ‘deviant’ homosexual behaviour, such as ‘luring of young people using money into homosexual acts’ in March.

The couple hope their wedding sets an example against this view.

If people are inspired by our love and actions and want to do the same to follow in our footsteps then we don’t mind being labelled as ‘role models’ in the LGBTI community.

Hiding who we are is what makes people judge us even more and makes them not accept us for who we are. If we can just live life openly then in time people will get used to the idea that gay and lesbian people are part of society and we are here to stay.

In February this year the pair told MambaOnline that being out to their parents and having the support of their families was one of the best aspects of their relationship.

The great at step that we took in our relationship as a gay couple was introducing each other to our families. We are so blessed to have supportive families who care about us. Even though we are gay they still love us.

Family is important to us and that is the number one reason why we want to have children. We also want our children to grow up in an environment where they are loved greatly by both parents who appreciate them.

The men will go by the double-barrelled surname Sithole-Modisane in future.
I

Is not a crime, is not a disease; it’s not something you can cure. It is how God created us.

Read More
‘Bible is no guide to gay marriage debate’